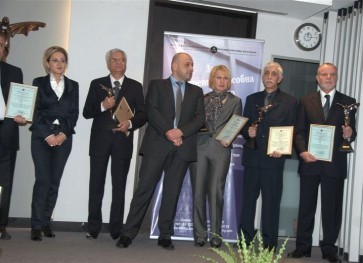 I know that honored with this award have not worked for her. I know that for all people like you, more important are the assessments that you give yourselfs, because only you know what goals you set. However, most honestly I  request you to accept this award not as an assessment and but as recognition from us, the members of the BIA, for the labor and the results you have achieved that make you good role models. So that not be distinguished from others in their dreams to live well, you have chosen work, but only honest way for yourselves, your friends and colleagues, namely- in work and creativity!  Be proud of your achievements in the field! Let's make your contagious example for society! "

With these words, Chairman of the Bulgarian Industrial Association Sasho Dontchev, opened the ceremony of the VII's annual awards of the chamber, "IN-5" to contribute to the development of Bulgarian economy.

Guests at the event were Minister of Management of EU Funds Tomislav Donchev, Minister of Economy and Energy Traycho Traykov, Deputy Minister of Finance Mrs. Pencheva, Aramas Ishmael - Ambassador of the Republic of Turkey in this country and others.

This year 15 companies were awarded as follows:

Sculpture "Icarus", made by Slavi Minekov with entry in the BIAs Book of Honorary and Certificate received:

Traditionally, this year's winners were also representatives of the media:

Highlights of speeches of the official guests can be seen here