Official start of the European... 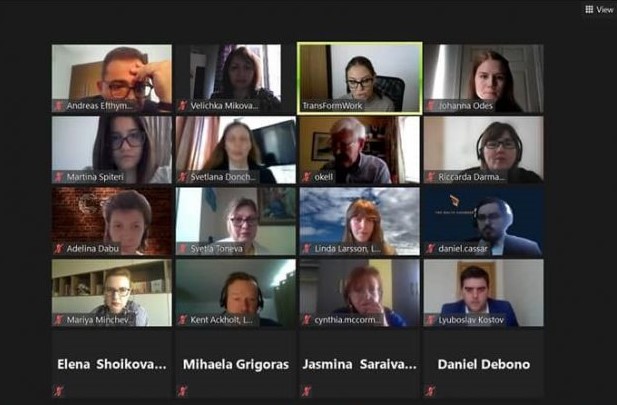 Today, the official start of a new two-year European project, funded by the Directorate-General for Employment, social affairs, and inclusion was announced during the initial online Kick-off Meeting, held between the Social Partners.

The "Social partners together for digital transformation of the world of work. New dimensions of social dialogue deriving from the Autonomous Framework Agreement on Digitalisation" TransFormWork VS / 2021/0014 is developed jointly by the Confederation of Independent Trade Unions in Bulgaria and the Bulgarian Industrial Association and brings together trade unions and employers' organizations from seven EU Member States (Bulgaria, Cyprus, Estonia, Ireland, Malta, Romania, and Sweden). Its main goal is to examine the implementation of the Framework Agreement on the digitalization process (June 2020).

The project will analyze the impact of the digitalization transformation on the social dialogue at a national level and will identify examples of good practices in the partner countries: initiatives, procedures, collective agreements in the world of work. The project is supported by the European Trade Union Confederation and BusinessEurope.

The project also aims to raise awareness of how with the right strategies and approach, digitalization could bring new opportunities and improve work conditions in various ways. By providing essential education and training, the outline intends to improve the knowledge of both employers and employees in the field of digital technologies and thereby adapt national labor markets to the new possibilities of work reorganization and redefinition of the environment in which it takes place. The project will assist and provide support when challenges and difficulties occur. Тhe project foresees study visits, round tables, and information days, including a final conference.

The first meeting was opened by CITUB President Plamen Dimitrov, who also spoke on behalf of the ETUC. He emphasized the importance of the project given the dynamically changing conditions in the world of work. He underlined the importance of flexible and coordinated actions by the social partners at both national and European levels. He mentioned other new initiatives of the Confederation in connection with the digital skills of the workforce and the joint actions of the social partners in Bulgaria and the EU. Rebecca Smith from BusinessEurope also addressed the partners, presenting the Agreement and outlining the possible areas of intervention by the project parties.

Additional news and information will be available on the project website.

TransFormWork - Social partners together for...