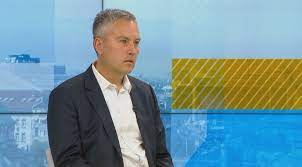 New, tougher measures are being introduced, which take effect from Monday and will apply until March 31.

The Executive Director of the Association for Modern Trade Yordan Mateev told BNT that these measures are inadequate.

"These measures are dangerous for people's lives and health, they are dangerous for businesses as well. Business community is also worried about the development of the pandemic and new restrictions were expected. But the lockdown came as a huge surprise. We believe that the decision to close small outlets in stores over 300 sq. m, will not have a positive effect, as the people who now shop in the big ones will start shopping in small neighborhood stores and this will increase the risk of infection", Mateev said.

In his words, question suggests itself, on the basis of what criteria large stores are more dangerous than small ones. It's not about the malls, we're talking about independent stores," Mateev stressed.

He is confident that large shops comply very strictly with the anti-epidemic requirements, and the shopping hours for the elderly (the so-called green corridors) works relatively well.

Mateev believes that the small shops will be privileged in the new situation. He also predicts that the big ones will adapt, perhaps reduce the shopping area and thus limit the risk of overcrowding.

AMT appeals for the re-opening of all non-food...

BIA supports the Elimination of the "Green...