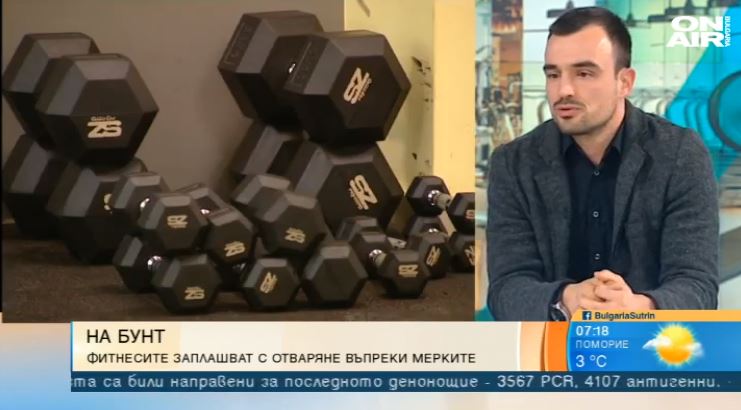 We want to work, but it still reimains unclear when we will open, Martin Gadzhev said from BAHF

In revolt against anti-epidemic measures gyms are also threatening to open in spite of the health authorities' schedules.

"At the moment no one knows when we will start working. We are waiting for a date to restart our industry, but there is no such thing yet. We are closed, we have no information when to work, and even if we restart - it is uncertain whether people will return right away. " owner of a fitness center Martin Gadzhev stated during his interview with "Bulgaria in the Morning".

"We also plan to protest on January 27, because we want to exercise our right to work," Gadzhev added.

According to him, all measures for disinfection were taken in the halls before the lockdown and the athletes also took the initiative to protect each other.

"We want to help the government and be of benefit, but we are not given the opportunity. We had patience, but we ran out of it, so we will join the protest." Gadzhev announced.

According to him, " a person who does sports tends to have a stronger immune system", so it is not certain that the pandemic is serious enough to have the centers closed down.

"People on the streets are overweight, they have no incentive to train. Very few people have the knowledge how to train at home".

He explained that government aid was delayed and gyms had already lost much of their staff.

"We are in favor of the government experts, but we must open. It is good to take an example from Europe, but it is good for it to be modified and applied to our country. The measures in our country are pushing the industries to bankruptcy. The industries in Europe have much faster and more up-to-date decisions" he commented.

Gadzhev noted that there is no way that a year of stagnation will not have its impact - "We lost our habit of training." When everything is back to normal, attention should be paid to the physical and mental health of people, he pointed out.