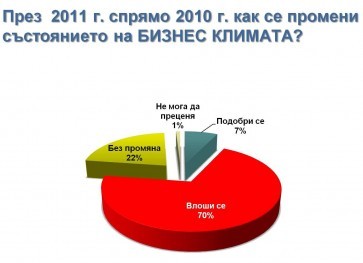 The effects of the global financial and economic crisis stand out prominently in this year's study of the BIA, conducted among 500 managers in the period 20 November - 7 December 2011

According to 70% of the questioned business conditions in the country have deteriorated, and by 22% remained unchanged. 7% see a positive change in business environment, and 1% can not judge. At the same time, respondents evaluated the anti-crisis actions of the government as a "rather unsuccessful" (73%)positive assessment given 12% of respondents, while 15% find it difficult to assess. Against this background, 53% of survey respondents reported worsening your company's performance, for 32% no change and only 10% reported a positive trend for the company yet.

The economic crisis has impacted most significantly on the volume of sales of businesses - 70% of respondents indicated that their sales have decreased further 17% declared maintaining levels of the previous year and only in 13% of cases has increased sales. Similar results were seen in terms of production volumes - in 66% of cases they decrease, 26% of respondents have maintained production volumes, but only 8% of companies increased their production. Almost the same proportion is also in the workplace - 56% of companies have taken a reduction in staff, 37% prefer to maintain their employment, while only 6% had hired new workers. With regard to investment in new capacity, products and human resources in 2011 compared to 2010, 57 percent of respondents reported a decline, 32 percent have maintained the level of the previous year, while only 11 per cent growth in deposits declare.

Crisis conditions for doing business are serious and affect the financial stability o fcompanies. The question "Do you have trouble paying their bank loans?" 25 % of those polled said that they had to restructure their loans, 11% admit that they have late payments, but 27% say that fail to operate smoothly their loans. A third asked (37%) said that no loans.

BIA study for years and puts the problem of high levels of corporate indebtedness. This year I have asked companies uncollected overdue receivables from counterparties. 83% of respondents answered positively to this question, 56 percent of respondents declared that in 2011 the liabilities to them have increased over the previous year, and another 34 percent say the level of commitments has not changed. Only in 10% there is a reduction of debt. In 40% of arrears delay was more than one year and 30% delay was for a period of 1-3 months. In the remaining 30% have delayed payments for 6-12 months.

Despite the serious impact of the economic crisis on the business environment in the country, including. the labor market, many employers declare that require skilled labor, including: narrow specialists (46%), executive staff (24%), management staff(22%), administrative staff (8 %) and laborers (7%). The main conclusion that can be made is that the interest of employers is mainly directed at a highly skilled workforce.

Regarding the prognosis of entrepreneurs for the development of the economic crisis next year pessimism prevails - 71% expected in 2012, deepening the crisis and the optimists who expect soothe trends are only 13 per cent. Save the state from 2011 to expect 8% and 7% are difficult to assess.

"2020 through the Business Viewpoint"

2016 THROUGH THE EYES OF BUSINESS