Pension reforms should be made in a... 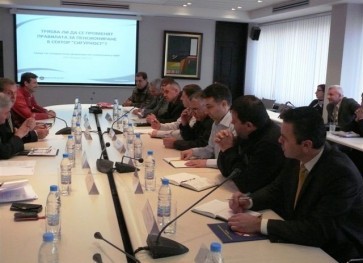 Meeting between the leaderships of the BIA and the Trade Union Federation of MVR officers was held today, November 29, 2011 The meeting was attended by representatives of other trade unions from the sector "Security," Vice President"Podkrepa" Dimitar Manolov, executive secretary of the Confederation Asia Goneva and Deputy Governor of the NSSI Merry Karaivanova.

President of the BIA Danev presented to the participants in the meeting chamber of the main proposals and reasons on the need to reform the pension system. He noted that the system is distorted and unfair to honest insurers are required package of emergency and unpopular reforms, the effects of which must be borne jointly by all members of society with the corresponding public consensus and understanding.

Having discussed the current status of the pension system and, in particular - the existing rules on retirement for workers in the "Security", the meeting participants agreed on the following key ideas:

1. Reform the social security system is required, but it must be done after the dialogue withall parties and reach consensus on different elements of reform.

2. Changes need to be implemented smoothly in small steps rather than shock and incrementally so as not to lead to further turmoil in the pension system;

3. BIA, Confederation and "Podkrepa" pledged to promote changes in the regulations, which ensure the possibility of working in the system of defense and security to be submitted to the National Council for Tripartite Cooperation through their membership of the nationally representative trade unions .

4. Every three months to conduct similar format as meetings to discuss current issues at the time and to seek appropriate solutions.

Mr. Danev presentation and pictures from the meeting are published below