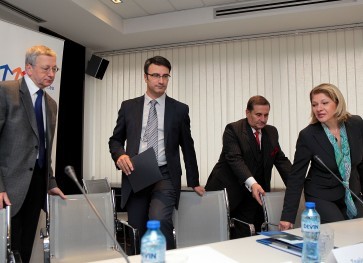 Bulgaria offers European Union to adopt common legislation for exploration and production of shale gas. This was announced by Minister of Economy and Energy Traycho Traykov during discussion "shale gas - energy alternative or environmental threat," held today, November 11, 2011, at BIA. This was the second-line discussion forum on "Clear Energy" [1], organized by the information portal 3E-news, Bulgarian Industrial Association and the Institute for Energy Management, with support from the Ministry of Economy and Energy, Ministry of Environment and Water , Information Office of the European Parliament in Bulgaria and the Republic of Poland Embassy in Bulgaria. The moderator of this forum was Prof. Atanas Tasev - energy expert.

Views on the topic of the discussion today expressed Ministers of Economy and Energy Traycho Traykov and the Environment and Water Nona Karadzhova, Ambassador Extraordinary and Plenipotentiary of the Republic of Poland in Bulgaria Leszek Hensley, head of the Information Office of the European Parliament in Bulgaria Violeta Stanicic. The Polish experience in the exploration of shale gas present expert Dr. Pawel Poprawa, a government consultant and head of laboratory for fuel at the Polish Geological Institute.


The discussion focused around the challenges facing research and production of shale gas in Bulgaria, the regulatory framework in Europe and at home, the importance of shale gas for energy security and diversifying energy supplies to Bulgaria, reducing energy dependence of the country, the concerns of environmental organizations impact on the environment.

According to Minister Traicho Traikov investigation for alternative extraction of natural gas is the first stage, which can lead to diversification of supply. He said that the country should examine what kind of resources are available and how much it will cost feedstock. According to him, if it comes to production, this will give a new horizon for the development of Bulgarian industry, will bring complete revenue to municipalities and find new jobs. The extraction must be economically justified, said Economy Minister and explained that shale gas in Poland worth USD 275 1,000cubic meters, while in the U.S. - 140-250 USD 1,000 cubic meters for comparison, imported Russian gas currently costs us about $ 400

Bulgarian initiative for a pan-European legislation on shale gas comes with the proposed by the German socialist John Line new directive on energy, which prohibit its exploration and extraction. Greens in the European Parliament also wants a ban research on alternative extraction. In Bulgaria, after the U.S. company "Chevron" received permission to study in the region of Novi Pazar, began protests from environmentalists.

Exploration and extraction will be on condition that are safe for humans and the environment, said strongly the two ministers involved in the discussion. TraychoTraykov said that Bulgaria has one of the most rigorous environmental laws in the EU,Minister Nona Karadzhova added that there are sufficient tools for impact assessment, including the Law on Environmental Protection, Biodiversity Act, Water Act and others. Furthermore, it is expected to start in December parliamentarydebates on the new Law on Environmental Protection, where plans include special provisions governing mandatory EIA studies for shale gas. "This is another tool, anadditional protection," said Minister Karadzhova.

She announced that the Ministry has not issued a permit for anyone doing research on shale gas in Bulgaria. Regarding allegations that in the region of Novi Pazar and Shumen make studies Karadzhova said it is not allowed and there are not MEW proposals. If there is to perform such studies, it is totally illegal, clearly was Karadjova Minister and urged citizens to report to the Ministry of unregulated wells.

"My deep belief is that the ban without knowing what it is, should not exist, "said Nona Karadzhova Ministry promptly and promised to inform the public as soon as in the ministry is established project to study the deposits of shale gas, but so far no.

"This is an additional energy source for our country, so we need to know whether we have potential, but quite another issue is whether it will use," said Minister Karadzhova. According to her, the anxiety of people in Bulgaria is caused from that part of society or politicians who express excessive fears of technology for the extraction of shale gas. She stated that exploratory activities for shale gas is carried out by the same process as for the study of natural gas and oil.

Her words were confirmed by the expert Kazandjiev Christo, who explained that we should not distinguish between shale and natural gas as their exploration and production used the same technology applied in Bulgaria for 60 years. "Therefore, it is strange why it was ever that high impact," expressed surprise Kazandjiev. According to him, on the topic it is put too much emotion and no facts and specifics, and this is detrimental to the achievement of social consensus. Forecasts for the destruction of the granary of Bulgaria - Dobrudja are highly exaggerated said more Kazandjiev. He explained that a drilling exploration engages 10-15 acres of land and 1 borehole extraction - 2-6 sq. km "People in Dolni Dubnik  have their wells in their yards for years and has never led to any damage to the earth, "said Kazandjiev. According to him, is optimistic to talk about in our field, before they carried out research activities, but can talk about potential.

Participating in the discussion representatives of environmental and other NGOs who oppose exploration and production of shale gas in the country, reacted strongly to statements by ministers and Traikov Karadzhova. They gave a concrete example of illegal drilling in the village and Rogozin cautioned that the lack of legislative texts governing studies of shale gas, leading to the granting of exploration permits for natural gas, which actually refer to shale gas, and thus no objective information on whether such studies are made or not. According to former MEP Dushana Zdravkova - representative of the Organizing Committee of Northeastern Bulgaria, submitted a petition to Parliament for study and production of shale gas, public discussion, as today, were delayed because the Council of Ministers has decided studies. Former MP Mincho Hristov even blamed the ruling that allows a private American company to use the territory of our country in the testing ground for unproven public interest of our contractual relationship with it.

According to Deputy Chairman of the BIA Kamen Kolev, before deciding on the matter should carefully and reasonably assess the benefits and risks. He stressed that the demand for alternative energy sources in all cases is useful and will enhance our energy security and independence. Along with this, however, there should be considered and potential environmental hazards and to prevent in any way a risk tonatural resources and human health. "It is appropriate to consider alternative energy sources, such as the development of nuclear energy production from renewable energy and energy efficiency," said Kamen Kolev. Presentation of Kamen Kolev you can find in attachment.

The Polish experience in exploration and production of shale gas told the forum was presented by the participant Pawel Poprawa - representative of the Polish Geological Institute, whose presentation you can learn from attachment.

see. Video material for shale gas on the television channel of the European Parliament