The transformation of big businesses... 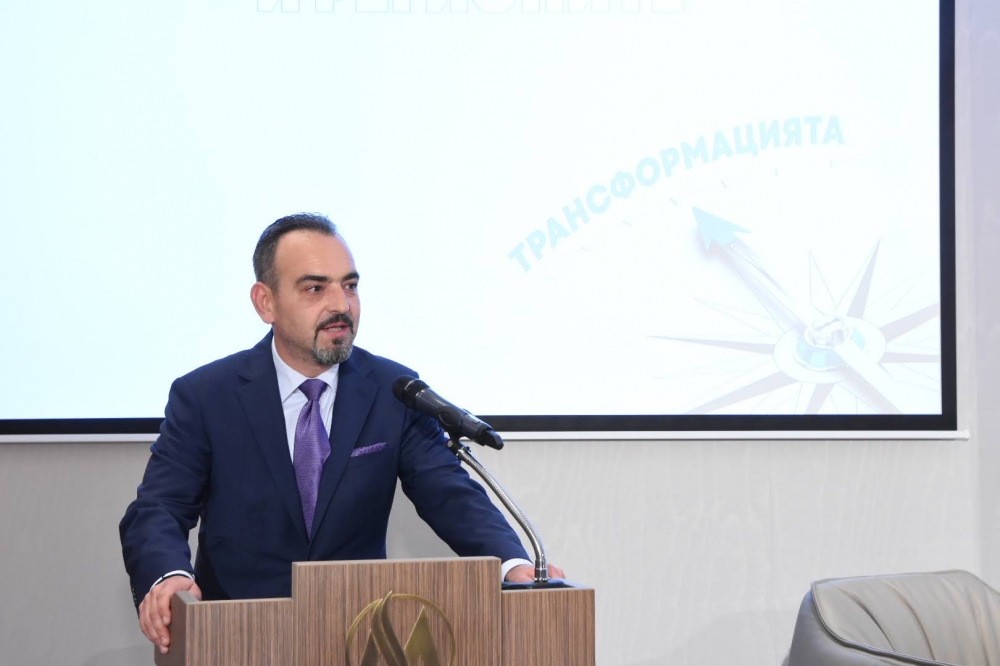 Only the joint efforts of business, local government and state administration can solve the challenges, stated Deputy Prime Minister Atanas Pekanov, who opened the conference "Business and Regions - Transformation".

The big Bulgarian companies started their sustainable transformation a long time ago, and the new initiatives in this direction are a continuation of what they are already doing. This became clear during the discussions in the first panel of the "Business and Regions - Transformation" conference, organized by the Bulgarian Industrial Association and BGlobal magazine.

Deputy Prime Minister for European Affairs Atanas Pekanov opened the conference, who told the participants that the Bulgarian and European economies face many challenges that they can only overcome with the joint efforts of business, local government and state administration. According to him, the focus should be directed in three directions - regional development and reduction of regional imbalances, policies for decarbonization of the economy and digitalization. He added that there is sufficient funding for achieving the goals under the Recovery and Resilience Plan and in the multiannual financial framework of the EU, under the Partnership Agreement and the operational programs. The funds will provide opportunities for the promotion of small and medium enterprises, the creation of new enterprises, research, training of employees, business promotion for high-tech initiatives and more. "But to be successful, it is imperative to have a dialogue. That is why I welcome today's forum. An opportunity to start a vital conversation between large companies, SMEs, and local authorities and see what we want to build for Bulgaria in the next decade. Bulgaria, which keeps up with the global processes, and at the same time protects its enterprises and workers in the regions ", Pekanov concluded.

Daniela Vezieva, Minister of Economic, who also welcomed the conference, noted that it is essential strengthening Bulgarian business's export opportunities through innovation. "The next programming period allows us to develop every region. But every municipality needs to know how it wants to look like in the future and what it wants to do; they cannot develop in all areas of the development strategy," she advised.

BIA's Chair Dobri Mitrev said that small and medium enterprises are the backbone of our economy, but the large companies are its locomotive because they are the first to implement sustainability, innovation, and corporate social responsibility policies.

"We need to clarify how we envision our mutual commitments so that the transformation affects not only large companies but small ones too; people and local communities. Moreover, for this transformation not to be dramatic, we need to know the socio-economic cost that we will all pay," Dobri Mitrev said.

Before the discussions, Executive Director of the Institute for Market Economics Svetla Kostadinova outlined the problems facing the Bulgarian economy at the moment. They are linked to high energy prices, which will last until next spring, low levels of vaccination, which is becoming an economic problem, and political uncertainty.

During the first panel of the conference, "Business Models of Sustainable Transformation" some of the most innovative Bulgarian companies were presented, which started implementing sustainable practices long before the Green Deal was brought to the publics attention.

Moderator Boyan Rashev, the managing partner at denkstatt Bulgaria, said that sustainable transformation is not a one-time act but a historical process that occurs daily in factories, fields, wells and cities and is driven by man's desire to live better.

Iliya Garkov, vice president of Dundee Precious Metals and executive director of the gold mining company for Bulgaria, said that transformation means a change from one state to another, and sustainable means no going back. "This is what we achieved when, 17 years ago, from a bankrupt company, we built a leader in innovation in the global mining industry. Before the pandemic, more than 300 companies worldwide came to Chelopech to see what we were doing and implement it in their production. But, unfortunately, only 17 Bulgarian companies visited us for this purpose, " Garkov explained.

According to him, the speed of such a transformation is impressive because there are no prerequisites for it in the country. He gave Australia an example, where it only takes three months to obtain a mining permit, whereas you need 17 years in Bulgaria. Nevertheless, Dundee managed to open the first mine in 40 years in Bulgaria - Ada Tepe near Krumovgrad. In the meantime, it has implemented a smart centre for remote control of mining activities, an autonomous underground drone and reduced its energy consumption in flotation processes ten times. The latest innovation, whose tests have recently been completed, is an independent 45-ton machine operating without a driver.

For Dominic Hammers, CEO of the Geotechmin Group, which manages more than 20 companies with a total of 4,000 employees, a sustainable transformation is to understand how your business affects the environment, people and the economy. And how the company obtains its positive influence. "We do not have a specific strategy for sustainability, but the balance between ecology, economy and society has always been at the heart of our work. It's not just something you do once, rather than constant work. So maybe we should not talk about transformation, but about sustainable progress, "he added. He gave an example with an investment made back in 2009 in the Ellatsite mine.

Its full automation reduces CO2 emissions by 4,300 tonnes, long before it became an EU priority. The group is currently installing two photovoltaic power plants on the ProAuto service bases of Geotrading AD in Sofia and Etropole. "We didn't start thinking about sustainably now. We will keep up our work. There will come a time when mining machines will be electric, and we will have to produce energy from renewable energy ourselves, but what is certain is that it's not a transformation; it's a sequel," Hammers said.

For another company participating in the conference, its own electricity production has concrete parameters. Ivan Gradinarov from Aurubis said the company had set the goal of meeting half of its electricity needs from renewable energy. The company has already built a photovoltaic fleet near its production base, covering only 2.5% of total consumption per year.

"In recent months, electricity prices have been quite high. Unfortunately, this trend will continue, and in terms of sustainable development of companies, they must secure their sources. Especially for energy-consuming production, such as ours," Gradinarov claimed. He also mentioned the ongoing experimental supply of an anode furnace to a company in the Hamburg group that uses hydrogen for fuel. If they complete this experiment successfully, it won't be long before we apply this technology in Bulgaria too.

The transformation of big businesses began a...

Dobri Mitrev: We all need to find solutions to...