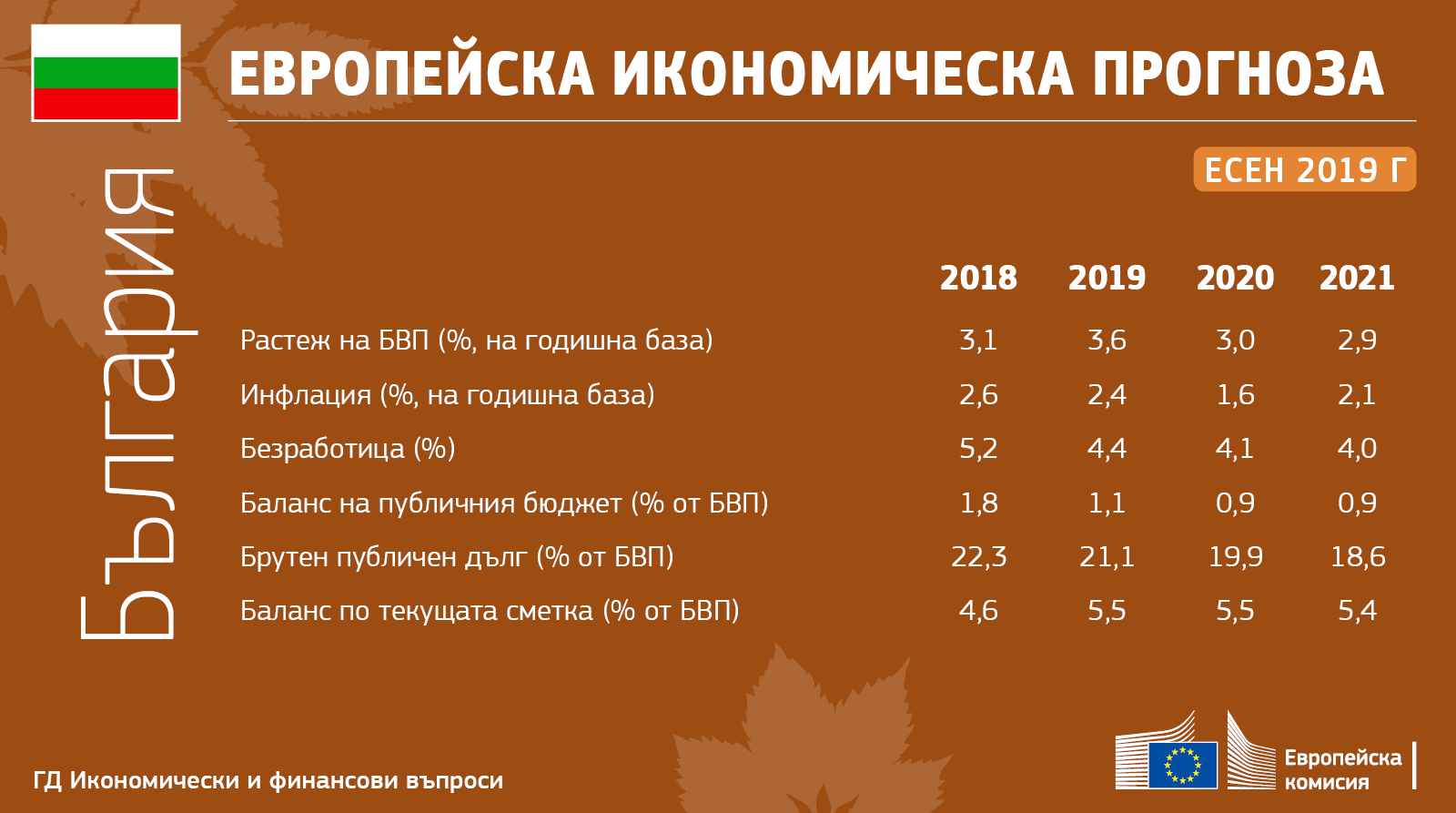 The European economy is now in its seventh consecutive year of growth and is forecast to continue expanding in 2020 and 2021. Labour markets remain strong and unemployment continues to fall. However, the external environment has become much less supportive and uncertainty is running high. This is particularly affecting the manufacturing sector, which is also experiencing structural shifts. As a result, the European economy looks to be heading towards a protracted period of more subdued growth and muted inflation.

Valdis Dombrovskis, Vice-President for the Euro and Social Dialogue, also in charge of Financial Stability, Financial Services and Capital Markets Union, said: “So far, the European economy has shown resilience amid a less supportive external environment: economic growth has continued, job creation has been robust, and domestic demand strong. However, we could be facing troubled waters ahead: a period of high uncertainty related to trade conflicts, rising geopolitical tensions, persistent weakness in the manufacturing sector and Brexit. I urge all EU countries with high levels of public debt to pursue prudent fiscal policies and put their debt levels on a downward path. On the other hand, those Member States that have fiscal space should use it now.”

Pierre Moscovici, Commissioner for Economic and Financial Affairs, Taxation and Customs, said: “All EU economies are set to continue expanding over the coming two years, in spite of increasingly strong headwinds. The fundamentals of the EU economy are robust: after six years of growth, unemployment in the EU is at its lowest since the turn of the century and the aggregate deficit below 1% of GDP. But the challenging road ahead leaves no room for complacency. All policy levers will need to be used to strengthen Europe's resilience and support growth.”

Growth to depend on domestically oriented sectors

Persisting trade tensions between the US and China and high levels of policy uncertainty, especially with respect to trade, have dampened investment, manufacturing and international trade. With global GDP growth set to remain weak, growth in Europe will depend on the strength of more domestically-oriented sectors. These, in turn, will rely on the labour market supporting wage growth, favourable financing conditions, and, in some Member States, supportive fiscal measures. While all Member States should continue to see their economies expand, domestic growth drivers alone are unlikely to be sufficient to power strong growth.

Labour markets should remain sound though improvements will slow

Job creation across the EU has proven to be surprisingly resilient. This is partly because economic developments typically take some time to affect jobs but also because of the shift in employment towards service sectors. Employment is at a record high and unemployment in the EU is at the lowest level since the start of the century. Although net job creation is likely to slow, the unemployment rate in the euro area is expected to continue falling from 7.6% this year to 7.4% in 2020 and 7.3% in 2021. In the EU, the unemployment rate is forecast to fall to 6.3% this year and settle at 6.2% in 2020 and 2021.

Inflation in the euro area has slowed so far this year due to the fall in energy prices and because firms have largely chosen to absorb the cost of higher wages in their margins rather than pass them on to customers. Inflationary pressures are expected to remain muted over the next two years. Euro area inflation (Harmonised Index of Consumer Prices) is forecast at 1.2% this year and next, rising to 1.3% in 2021. In the EU, inflation is forecast at 1.5% this year and next and 1.7% in 2021.

Public debt levels to fall for a fifth year in a row; deficits to rise slightly

Risks to the outlook remain mainly to the downside

A number of risks could lead to lower growth than forecast. A further increase in uncertainty or a rise in trade and geopolitical tensions could dampen growth, as would a sharper-than-expected slowdown in China due to weaker effects from policy measures enacted so far. Closer to home, risks include a disorderly Brexit and the possibility that weakness in the manufacturing sector could have a bigger spillover effect on domestically-oriented sectors.

On the upside, an easing of trade tensions, stronger growth in China and lower geopolitical tensions, would support growth. In the euro area, growth would also benefit if Member States with fiscal space were to choose more expansionary fiscal policy stances than expected. Overall, however, the balance of risks remains decidedly to the downside.

For the UK, a purely technical assumption

In the light of the process of the withdrawal of the UK from the EU, projections are based on a purely technical assumption of status quo in terms of trading patterns between the EU27 and the UK. This is for forecasting purposes only and has no bearing on the process underway in the context of Article 50.

This forecast is based on a set of technical assumptions concerning exchange rates, interest rates and commodity prices with a cut-off date of 21 October 2019. For all other incoming data, including assumptions about government policies, this forecast takes into consideration information up until and including 24 October 2019. Unless policies are credibly announced and specified in adequate detail, the projections assume no policy changes.

The European Commission's next forecast will be an update of GDP and inflation projections in the Winter 2020 Interim Economic Forecast.