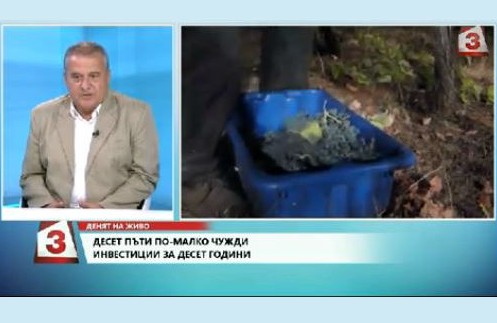 “The peak of foreign investment in Bulgaria is 2007, partly in 2008, and if we compare to 2017, there are now almost 8-9 times less attracted foreign investments. Currently, Serbia and Croatia are ahead of us on investment per unit of GDP.” This was announced by the Vice President of the Bulgarian Industrial Association Kamen Kolev.

“We have analyzed the reasons, but we are making a comparative analysis of the appeal of the neighboring countries around us,” he added. “It is noteworthy that as investment intensity - that is, how much foreign investment we attract per unit of GDP, we are far behind Serbia, behind Croatia. Even though Serbia is not in the EU, there are more foreign investments there - it is a matter of state policy, of business environment,” Kamen Kolev said.

“We are still a bit better than Romania”, he added. “4-5 years ago the difference with Romania was 2 times more investment per unit of GDP, and now it is 20%.”

The analysis of current foreign investments by the Bulgarian Industrial Association shows that “the majority are for expansion of already made investments, but the green field investments are missing.”

The relative share of „not so good foreign investments in real estate continues to be high, because the expansion of a branch network, of course, improves the service but has no multiplying effect on business,” pointed out Kamen Kolev.

He listed the reasons. „The main reason, we think, is the insufficient workforce - this is the first question of the investors: qualified and unqualified. The second question is about the infrastructure. Thirdly, there is the problem of being at one of the last places to connect to network operators. Here the problems are not so much for regulations but deeper, they are based on basic laws - the Spatial Planning Act, the behaviour of the municipalities. It has to be changed to shorten this time,” said Kamen Kolev.

He pointed out that the level of pay in our country over the past 5 years has doubled, but “we are still far from the wages you can get in western countries. We would not be able to reach this standard for 5-10 years,” predicts Kamen Kolev.

“Bulgaria has attractive conditions, including pay, in terms of foreign workforce with decent remuneration - we are attractive to Ukrainians, Belarusians and for them the living conditions, and the salaries are sufficient,” said the Vice President of the Bulgarian Industrial Association.

Kamen Kolev paid attention to a positive trend. “The structure of exports has changed: mining and quarrying products were leading export goods, but now the leading sectors, thanks to the hi-fi investments, are the electrical industry and mechanical engineering”, said Kamen Kolev and stressed upon several suggestions of business to the authorities for improving the environment for foreign investors.

“Regarding the business environment, this is the electronic exchange with the administration, the resolution of commercial disputes, the protection of property. It is important to take measures for the stability and predictability of legislation. This is needed for the long-expected eGovernment to become real, but still nothing is done.”

“We propose not the client to prove facts and carry around documents, but to declare that he meets all conditions and the administration to be the one to check whether this is true. Only then the implementation of these e-services will be taken seriously”, said Kamen Kolev.