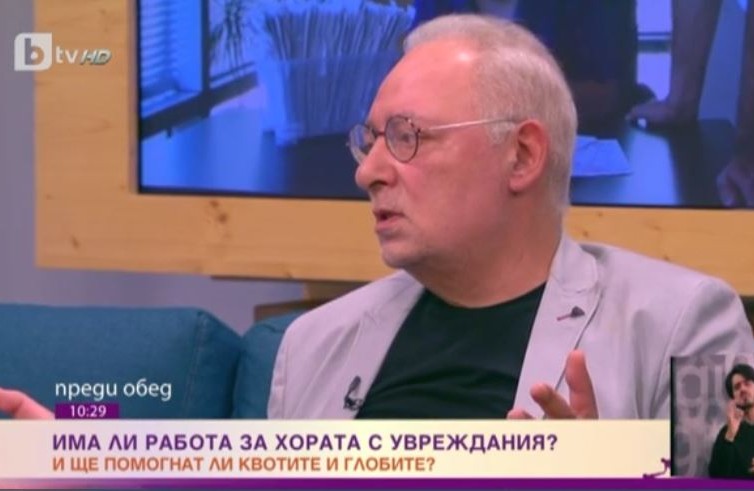 “The state wants to take half a billion BGN from the Bulgarian employer for something for which he is not to blame,” said the Executive President of BIA.

Since the beginning of the year, about 13 thousand Bulgarians with disabilities have registered in the labor offices, of which 5,2 thousand have been employed. For the last 3 years, one in five companies has offered work to a disabled person.

Recently, the Social Ministry has proposed the introduction of mandatory quotas for employing people with disabilities and fines for those employers who do not meet the requirement. At the same time, it is proposed to drop the existing protection from the dismissal of this type of staff.

“European practice is a mantra that is not true - there are countries that apply this mechanism, there are those which do not apply it. It is curious that the UK has the tragic attempt to introduce the quota principle and then cancel it (already in 1995),” said Radosvet Radev.

He clarified that the Bulgarian business, in addition to a deficit of justice, is also experiencing a work staff shortage. “This deficit forces the Bulgarian employer to look for people with all sorts of talents and qualities, regardless of their health status,” Radosvet Radev said.

According to the Executive President of BIA, “this is an arrogant interference of the state in a free market. The roughness is not in the quota, but in the sanction. There are about 750,000 people with assessments by the Medical Expert Commission for Work Capability Assessment in Bulgaria, of which about 250 000 are of working age, i.e. 250,000 people must be hired. The planned sanction for each unemployed person is BGN 2,000 a year, which is half a billion BGN that the Bulgarian state wants to take from the Bulgarian employer for something that he is not guilty of. That same state must make such regulations, which ensure the birth of healthy children, and which give people with disabilities the opportunity to be educated and work, i.e. to have an accessible environment.”

“People with disabilities, who have the necessary skills and qualifications are currently working with Bulgarian employers, without the ridiculous interference of the state”, added Radosvet Radev.

According to Radev, the fastest growing industry in Bulgaria is the production of people with disabilities - in the census of the population in 2011, their number was 465 000 and currently their number is 750 000.