Is it possible to raise the minimum... 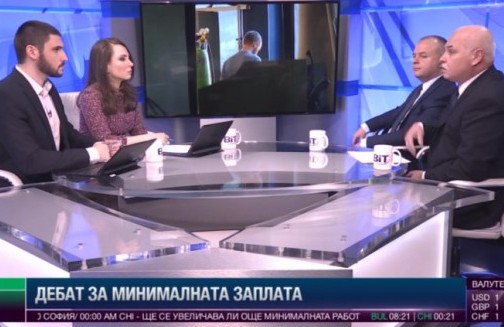 A rise of the minimum wage with BGN 100 by the end of 2020 demands the trade union CITUB.

A rise of the minimum wage with BGN 100 by the end of 2020 demands the trade union CITUB.

Whether is a possible for their demands to be fulfilled during the negotiations with the Bulgarian caretaker government commented the Vice President of the Bulgarian Industrial Association (BIA), Mr. Dimiter Brankov and the Secretary General of the Bulgarian Chamber of Commerce and Industry (BCCI), Mr. Vasil Todorov.

“The BCCI is also ready to debate on the minimum wage, but not on its rise, about the mechanism for its determination”, added Vasil Todorov.

“For the past 10 years the minimum wage has grown the fastest, the employment rate has the smallest improvement and the productivity is somewhere in the middle. So we have a strong growth of the minimum wage”, said Dimiter Brankov.

According to his words, the unreasonable growth of the minimum wage has an impact upon low-paid jobs, municipalities with a high unemployment rate, sectors with low payment and low productivity, as well as upon the unequal groups on the labor market. All of them are influenced by this rise and the inability to find a job in the regions, which are experiencing stagnation, added Mr. Brankov.

Vasil Todorov commented that there is no explanation why the proposal of the trade unions is for a rise of exactly BGN 100 for the next three years. “Our goal is to set a mechanism for the determination of a minimum wage”, added Mr. Todorov.