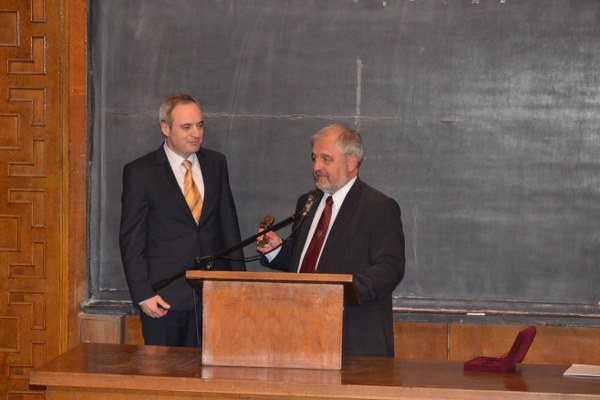 At a General Assembly held on 17th November, 2015, in Lecture Theater 65 of the Rectorate of Sofia University, Professor Dr. Habil. Anastas Gerdzhikov was elected Rector of the oldest and most reputable higher academic institution in this country with 190 votes. The other candidate for the post, Professor Dr. Tony Spasov, Corresponding Member of the Bulgarian Academy of Sciences, garnered 162 of the votes.

Professor Dr. Habil. Ivan Ilchev, the out-going Rector, handed the key of the University to the new Rector wishing him to open ever more widely Sofia University to the world. Professor Ilchev thanked both candidates for the post for behaving in an honourable way in an atmosphere that some people had tried to discredit.

Professor Anastas Gerdzhikov expressed his gratitude to all who supported him and also to all those who supported Professor Tony Spasov. He also expressed his gratitude to Professor Tony Spasov for the tolerant campaign and pointed out that the latter was a worthy competitor. According to Professor Gerdzhikov, in the debate between the two, with the support of the academic community, the main problems and solutions that the University has to step on, have been sketched out. “I hope that that key will be a sign that we will open the University to the city of Sofia and to the world.” He appealed to the academic community to continue the debate and that the latter should not take place once every four years. “Help us with the fact that your ideas have been many more than the ideas of those 50 people who actively got involved in the last four years. When, instead of 50, there are 400 or 500, then the difference would be obvious. This is why I wholeheartedly appeal to you to work with the working groups in the projects and in all the activities of the University the way you actively did over the past month,” Professor Gerdzhikov added.

Anastas Gerdzhikov completed his secondary education in 1982 at the National Gymnasium for Ancient Languages and Culture. In 1984-1985 he read classics at Sofia University St. Kliment Ohridski. In the next academic year he continued his studies at the Humboldt University in Berlin where he graduated with an MA in 1990 with a thesis on the topic of “Aristotle’s Critique of Plato’s Political Works.”

In 1990 he became a part-time lecturer, and in 1991 a full-time assistant-professor in Latin at Sofia University St.Kliment Ohridski. He specialized in Austria (1994, the scholarship of the Austrian section for academic exchange) and in Germany (1997, a scholarship of the German section for academic exchange). In 2001 he was conferred a PhD degree for the thesis of “The Concept of ‘Clementia’ in the Tradition of Roman Literature from the Period of the Republic and the Ideology of the Early Principate”). In 2004 he was elected docent in ancient literature (habilitation work on “The Image of the Prince in the Corpus of the Latin Panagerics”). In 2006 he was conferred the degree of the “Doctor of Philological Sciences” for his work “The Mirror of the Prince. Origin and Development of the Genre of Speculum regale in Antiquity and the Early Middle Ages”. Since 2008 he has been Professor in Ancient and Medieval Literature (habilitation work “The Development of the Genre of Speculum regale in the ХIIth and XIIIth centuries”).

Professor Gerdzhikov reads the lecture course on Latin (phonetics and phonology, morphology, syntax) and Roman literature at the Department of Classical Philology at Sofia University St. Kliment Ohridski both to BA and MA students.

The scientific interests of Professor Anastas Gerdzhikov are in the domain of Roman literature and the political theory of Antiquity and the Middle Ages. He has authored four monographs and more than forty articles on ancient literature and high academic education. He is the first translator in Bulgarian of Aristotle’s “Politics”.

Anastas Gerdzhikov was deputy-minister of education and science (2001- 2003), governor of the Scientific Research Fund (2007-2008) and member of the Specialized Council for Studies in Literature at the High Attestation Commission (2007-2010). In 2010 he was appointed deputy-rector of Sofia University St. Kliment Ohridski and was in charge of accreditation and the scientific activities (2010-2011) and of the educational process, PhD students and continuous education (2011- 2014).

He is on the editorial boards of Strategies of the Educational and Scientific Policy and of the Bulgarian Journal of Science and Еduсаtion. Professor Gerdzhikov is competent in English, German, French and Russian.