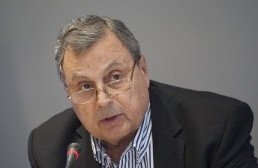 The poorest country in the European Union enables some public sector workers to retire in their forties. Elena Yaneva hopes she won't be caught up in Bulgaria's pending pensions overhaul.

"I do hope I can retire by the end of the year, otherwise I will have to race with the increase (in retirement age) for who knows how many years," said Yaneva, an accountant who turned 60 this month. "And I do not want to die at my workplace."

Her anxiety underscores how, for all the noisy debate in western Europe about foreign workers, mass emigration puts a strain on the economies of former Eastern Bloc countries.

Poland has lost about 1.2 million workers since joining the EU over a decade ago, while in some villages in Romania the few remaining children are brought up by grandparents while the parents work abroad.

The exodus of young Bulgarians since Communism fell in 1989 means Bulgaria's pension system swallows 37.5 percent of the central government's budget, up from 12.8 percent in 2003. That could rise to 70 percent in 10 years, according to Labour Minister Ivailo Kalfin.

Bulgaria's population has shrunk by a fifth since 1990 to 7.25 million. Yet the average age when Bulgarians first receive an old age pension is 57, the lowest in the EU along with Poland, Romania, Slovenia and Slovakia, according to 2012 Eurostat data. A 2013 World Bank report estimates just one in two Bulgarians will be of working age in 2050.

The pension system is also riddled with dodges such as employers paying the minimum wage on the books, then some more in cash, reducing pension contributions to the state.

Moreover, claims for disability pensions have more than doubled as a percentage of GDP since 2001. One in eight Bulgarians is officially disabled in some way.

"Everybody knows the reasons for the deficit," said Krassen Stanchev, a founder of the think tank that has published a study on pensions. "But nobody dares to do anything," he said, because the proportion of younger voters who are net contributors to the budget is shrinking.

Those who benefit still struggle to live on the thinly-spread payments. Simeon Naidenov, a 58-year-old former policeman who first started drawing a pension aged 42, has taken jobs as a security guard, a construction labourer and a driver for a casino.

"I cannot even afford to go the seaside," said Naidenov, a former commando in the "Red Berets" counterterrorism unit who draws a monthly pension of 240 euros ($260).

Borisov has already faced street protests since becoming premier again in November over plans to raise the pension age by four months every year. Trade unions want a slower increase. A full set of reform proposals could be sent to parliament in April.

At the same time Borisov pushed a law through parliament to end mandatory payments to private pension funds, a move he defended as giving workers more choice but that business and coalition allies panned as a savings grab.

If he moves too slowly to tackle pensions, healthcare and endemic corruption in the judicial system, he risks alienating his main partner, a right-wing group of parties called the Reformist Bloc.

"If they don't push on with the reforms, the coalition will fall apart and this will bring down the government," said Kamen Kolchev, the head of ELANA Financial Holding in Sofia.