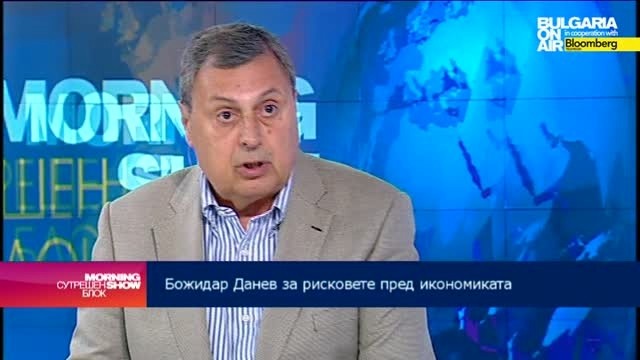 Bozhidar Danev, Chair of the Bulgarian Industrial Association (BIA), has suggested that the country may close the year with negative economic growth.

In a Friday interview for the Bulgaria On Air TV, the BIA Chair pointed out that the first symptoms that the economy was lagging behind were showing.

Asked to predict whether the political crisis could turn into an economic crisis, Danev claimed that Bulgaria could report negative economic growth at the end of the year.

"The situation is extremely serious. Last year, regardless of the modest increase, the Bulgarian economy registered a pronouncedly positive economic growth and it outpaced Europe's average growth. However, this does not mean that it is satisfactory. For an economy with such low indicators as ours, we expect the growth rate to reach 3-4-6%, so that we can catch up with other European countries" Danev said, as cited by money.bg.

He informed that data of BIA by May 2014 made it clear that the economy would not be able to match this pace of development.

Danev also blamed the political situation in Bulgaria for the lack of investments, adding that the country was scaring away investors.

Asked to comment on allegations that data of the Bulgarian National Bank pointed to a redirection of investments abroad, he said that a lack of calm and predictability in a country forced the business sector to move their capital out of the country. He noted that this was already happening in the country.

Danev predicted a rating downgrade in the next 6 months, adding that a "minus" was expected to be added to the "BBB" rating due to the political turmoil.

He also noted that the lack of optimism in the forecasts about the state of the economy was due to the fact that exports were decreasing, investments were limited, and consumption was also dropping.

"We expect an increase in electricity prices, which were artificially suppressed for political purposes as a curtsy to the electorate," the BIA Chair stated.

Danev also said that he expected extremely worrying trends by the end of the year in the sphere of the economy.

"There will be no investments, which means that we will not be able to cope with the unemployment, most notably youth unemployment. The brain drain of IT specialists, medical experts, etc, continues" he said, adding that the new government would face serious challenges.