BUSINESSEUROPE message to the Spring... 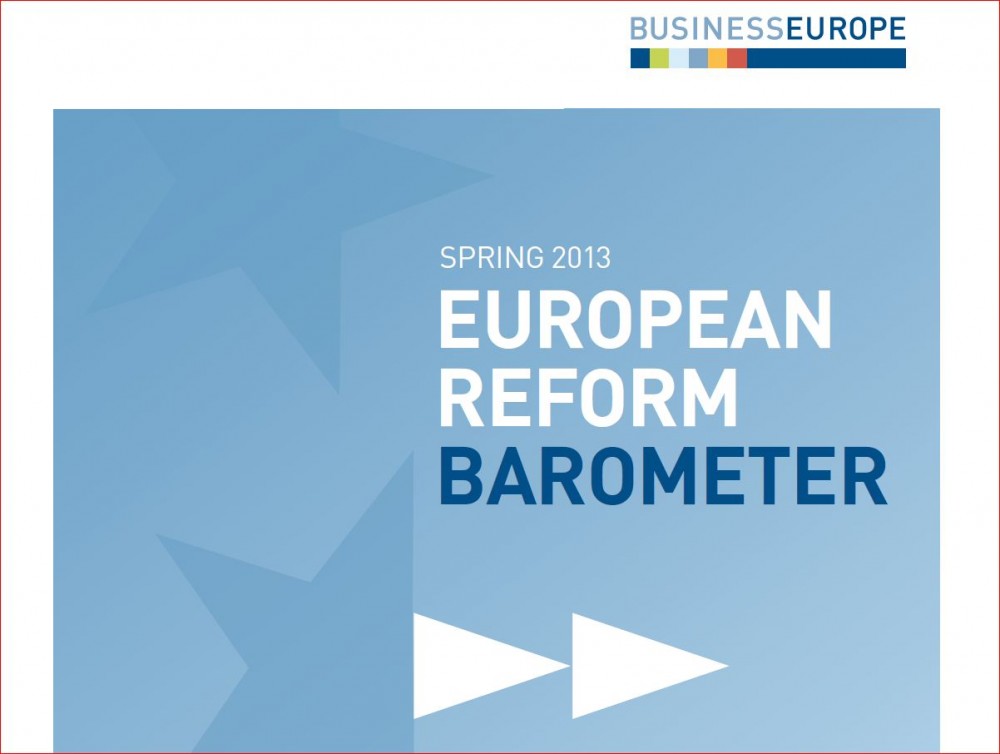 Europe is entering into a critical phase of its recovery. On the surface, there are signs of improvement but we are walking on very thin ice and the pendulum can quickly swing back to the worst moments of the crisis if doubts about the ability to pursue necessary reforms in the European Union re-emerge.

Almost five years have passed since the outbreak of the global financial crisis. Yet Europe remains unable to return to a path of sustained growth. The second half of 2012 saw some reduction in financial market uncertainty, boosted both by a strong commitment from the European Central Bank (ECB) to support the single currency, and action from EU leaders to strengthen the institutional foundations of the Economic and Monetary Union (EMU) by agreeing the initial stages of a banking union. Output nevertheless fell.

Whilst economic activity in the United States and Japan is estimated to have climbed above its pre-crisis peak in 2012, EU GDP remains below 2008 level. Unless Europe focuses on policy measures which really increase competitiveness, build business confidence and kick-start economic activity, the post-crisis divergence in growth performance that emerged in 2012 between the EU and other major economies threatens to become a long-term phenomenon.

By eliminating 50% of euro area countries’ gaps with OECD best practise in pro-competitiveness policies, Euro area GDP could increase by 3.75% within 5 years.

A well-functioning and integrated Single Market is an essential basis for our competitiveness, and can act as a spring board for access to global markets through negotiations of free trade agreements with key international partners. But we need to unlock its full growth potential by lifting remaining obstacles to cross-border business and improving market functioning in all Member States.

Member States must continue to press ahead with structural reforms during 2013 and live up to the commitments made in the context of the European semester. The European Commission must present ambitious country specific recommendations. And EU policies should support Member States in their reform efforts.

The greatest improvements came in the area of financial stability. But reform progress in key areas for productivity, investment, trade and competitiveness is too slow. Fiscal consolidation must be accompanied by growth enhancing reforms and focus upon reductions in public expenditures rather than tax increases. And labour markets must become more flexible to facilitate job creation, transitions between jobs, and help to match skills supply and labour demand.

In order to be able to make the investments essential for long-term growth, companies need to be confident that leaders are committed to policies that support competitiveness and economic stability. BUSINESSEUROPE’s 2013 Reform Barometer has identified five key areas for reforms: 1. taxation and public finances, 2. business environment, 3. innovation and skills, 4. access to finance and financial stability, 5. labour markets.


Progress on structural reforms contributed to an improvement of financial stability.  Annual government borrowing in the EU is falling. But further progress is required on fiscal consolidation. To help reduce overall tax burdens, fiscal consolidation should focus primarily on reductions in current public expenditure, protecting investment, not tax rises. And tax reforms should shift taxation away from labour and capital, which is most damaging to growth and employment.


Both national and EU regulation must be designed to minimise administrative burdens. Opening markets to increased competition, including through completion of the Single Market in areas such as services, energy and the digital economy can help drive productivity growth and employment creation. And we must make sure that energy and climate policy choices allow European companies to be competitive in international markets.


Research and development spending remains stuck at around 2% in the EU, substantially below both the US and Japan. It must be increased to reach the goal of 3% GDP. Innovation policies must be more business oriented.  As most European countries’ performance in key skills are now significantly lagging behind the best performing Asian economies, priority must be given to promoting scientific, technological, engineering and mathematics curricula in initial education and lifelong learning, with a particular role for universities to achieve world class learning outcomes.


Interest rates charged for bank loans to corporations have diverged, increasing most strongly in Euro area countries with rising sovereign borrowing costs. And the willingness of banks to provide loans to SMEs deteriorated over the last 18 months. In order to allow business to make the investments required to drive the recovery, new regulation of financial services must strike the right balance between increasing financial stability and the need to ensure that companies are able to access finance on reasonable terms. Alternative financing routes to bank lending also need to be facilitated. And the Euro Area needs to make progress on implementing the banking union, notably the single supervisory mechanism, in order to reduce divergences in borrowing costs.


Countries with most rapid increases in unit labour costs before the crisis have started making progress, but further progress is needed to ensure that labour costs are in line with productivity. The tax wedge on low income earners must be reduced to avoid unemployment and social benefit traps. Targeted cuts in employers’ social security and flexible contractual arrangements are “a must” to encourage recruitment. And further measures to ensure that the retirement age evolves to reflect longer life expectancy are still needed in many Member States.

Almost 5 years have passed since the outbreak of the global financial crisis. EU output remains below 2008 level, with 8 million people having lost their job since the start of the crisis. Across Europe, companies are producing world-leading goods and services drawing on cutting edge technology. But the rest of the world is not standing still. Emerging economies are strengthening and attracting international investors. The European Union and its Member States must therefore strengthen their support to business if we want to launch a new phase in the European recovery.

The European Council and the EU Commission must really refocus the EU agenda on competitiveness and ensure that the 2013 European Semester strengthens implementation of structural reforms to kick-start growth and employment creation.