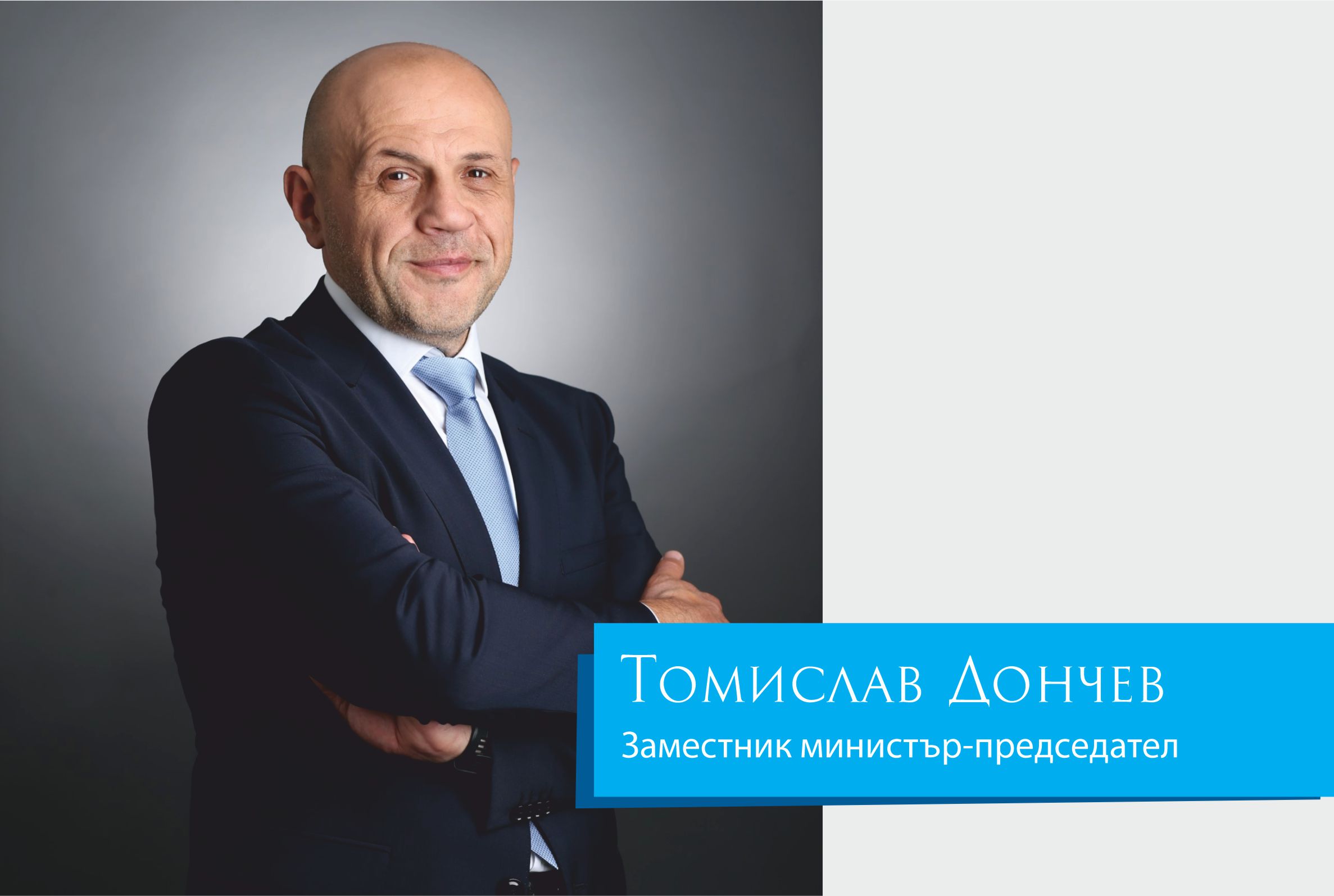 Tomislav Peykov Donchev is Deputy Prime Minister and was previously Mayor of Gabrovo (2007-2010), Minister of the Management of the EU Funds during the cabinet “Borisov 1” (March 2010 to March 2013), MP in the 42nd National Assembly (May 2013 to August 2014) and a member of the European Parliament from the Group of the European People’s Party (EPP).

Mr. Donchev, the digitization of the state government is key for the modernization of the state; not only is it important for changing the way of communication, it is also about transparency, convenience, faster processes, traceability and quality control. How many and which services did you manage to transform from physically having to wait at counters to having to click a few times to get a job done?

At present, nearly 400 services have been developed and published on the Single Portal for Access to Electronic Administrative Services (EPDEAS). It required over 500 electronic forms of applications and accompanying documents to implement this change. The number of EPDEAS visits is over 1 400 000, of which 76 % are newly registered visitors since the beginning of 2020.

The most frequently requested service, which was published immediately after the emergency was declared, is the registration of jobseekers. We developed E-services providing information about the compensation from the state to employers. Requesting and obtaining an e-certificate of criminal record can now be done through cloud-qualified e-signature (CEP).

The National Revenue Agency, which is among the institutions with the highest turnover of electronic communication, provides 4 new services related to control proceedings and declaration of data under the Law on Personal Income Taxes. In addition, we created the possibility of electronic submission of 14 other services.

The process is gradual. Forming the habit of seeking and receiving an “unpopular” service online leads to more pressure of institutions introducing and adopting more and new e-services.

There are contradictions when it come to the amount spent on the digitalization project. How much money did the government spend on it during the last 5 years?

The funds spent on e-Governance and the used ICT amount to approximately BGN 569 million over a period of 3 years (2017, 2018, 2019). For 2019 they amounted to about 282 million leva (including the costs for computers, printers and current maintenance of systems), which represents 0.2 % of the State budget.

For comparison, Sweden, invests about 1.4 % of its GDP in ICT and this results in a higher percentage of individuals using e-services – nearly 60 %. There are countries like the UK that invest the same percentage of GDP as Sweden, but a much smaller proportion turn to e-services – only 20-25 %. Countries such as Italy, Austria, Norway and the Netherlands invest in e-governance around 0.6-0.8 % of their GDP. The international practice shows that very often e-governance projects do not develop in the way they are planned out and this does not always depend on the amount of the resources invested in the specific project.

Evidentially from the statistics above, Bulgaria spends less money on an annual basis on e-governance, both as a percentage of GDP and as an absolute value.

The speculative claims that the government spent BGN 3 billion on e-management are often recycled. I don't know what sorts of calculations can conclude in such a result. I can only assume, that they include all the costs the state invested in computers, printers, servers, cables, light bulbs, etc. over the last 10-15 years. And even if this is logic of these calculations, they’re still wrong, as this type of expenditures have little to nothing to do with the e-management. In fact, one of Bulgaria’s main problems is that it spends too little money on e-governance.

From the last annual report on the state of administration it becomes clear that in 2019 the total number of posts exceeds 142 000 including those in the Ministry of Interior. In 2010 there were about 135,000. For nine years, the number has increased by 7000 even though we are becoming more digital. The situation is similar in the case of real employees. In 2019, there were 131 thousand people, whereas in 2010 there were 124 thousand. What is the reason for this increase in the administration?

At first, the data on the overall number of the administration in the reports is disturbing. I will give several examples from different years for a comparison basis: In 2008-86 thousand, in 2010-135 thousand, in 2012-144 thousand employees. Does this, however, mean that in 2010 compared to 2008, the administration actually increased by nearly 50 thousand and that in 2012 compared to 2010 it has grown by more than 9,000?

The results can be explained by relating to the scope of the aggregated information. For example, the increase in 2010 is due to the fact that the Ministry of Interior and its structure (the functions for forfeiture of illegally acquired property) were presented in the analysis for the first time. Thus, the total number “increases” by 58 170 from the Ministry of Interior and 264 from the CIPD, but only because they hadn’t submitted and reported before.

Such an example can also be given for 2012 – it was then when we obtained data for large structures such as NSI (USS 3), NHIF (USA (2 273rd), SFA (1 660st), Directorate General “Secura” (1,461, SG) for the first time. Until 2012, a number of administrative structures were not recognized as state administrations, citing their special laws. Amendments to the legislation were made in 2012 and these administrations began to apply to the Law on Administration and, thus, report their data on the state of their administration.

Within the last 10 years, the administration has generally declined. In the period 2010-2019 the percentage reduction is 9.81% (without municipal and regional administrations) compared to December 2010. Over the same period, the number of administrative structures has decreased from 625 to 592.

It is often speculated that the number of public servants in Bulgaria is huge, compared to countries in Western or Northern Europe, for example. In fact, state and local administrations are completely comparable in terms of population shares compared to the old Member States.

Are cuts a possibility?

Cuts will certainly be considerable and realistic with the further development of the e-government, especially with the increasing demand and access to electronic services by citizens. In order to reduce the involvement of human resources in the administrative services, we need to achieve a significant leap in the digital skills of our fellow citizens and encourage them to trust e-services. The studies conducted 2 years ago on the willingness of people to use e-services indicate a low starting point. The education reform is key to the development in this direction.

What do we lack in order to be like Estonia, which, in a short time and with relatively minimal costs, built up a working e-government and split up with paper forever?

The comparison with Estonia is depressing not only for Bulgaria, but also for many other European countries. It is no accident that Estonia has become a globally successful model of e-governance. It is good to remember, however, that Estonian reform has started in 1999 and has developed evolutionarily. It is naive to speak of e-government as a one-time event. This is a process of continuous improvement, expansion, deepening, correction of failures, etc., which has no endpoint. The claims of only 25 million euros invested by Estonia for the implementation of e-governance are negligible.

Despite the adoption of the e-Governance Strategy in Bulgaria in 2002, the political intentions remained only on paper for over 10 years. The E-Government was undertaken either by a minister without the necessary budget, or by the Ministry of State Administration and Administrative Reform, or by a deputy minister in the Ministry of Transport. The model remained mostly inefficient – decentralized, and each institution was left on its own.

In 2016 a strategic and preliminary restart was made through a new institutional approach by creating a centralized body in the form of the State Agency “Electronic Governance”. Taking into account the natural period of initial structuring of the agency, the current government carried out real actions to implement e-government government. I had the opportunity to be in charge of the Agency for around 2 years in the period 2017-2019 and I can say that the foundations of e-management have been laid by putting into service its horizontal components: System for inter-register exchange, electronic service, electronic communications exchange, implementation of a Single model for requesting, payment and receiving of electronic administrative services.

Many laws have been changed to remove the requirement of paper certificates. The current government is also the first to focus on reforming and digitization of registers and starting its implementation.

The statistics provided by the SAES speak for themselves:

I am convinced that the development of an e-government in Bulgaria has reached a stage of irreversibility and natural acceleration, for which the pandemic was also a catalyst. It remains to be developed further for people to take advantage of the opportunities provided by electronic identification, and to expand the use of e-governance by investing in the digital skills of citizens.

In an interview you say that “the rich countries are those, which are able to produce, to invent things that others can't”. What must we produce in order to be among the rich countries, and how will the state contribute to this?

In supply chains, added value is not distributed equally among all participants. The one who owns the brand, the one who designs the product, the one who sells the entire product- those are the ones who usually earn more than those who produce individual elements and components.

It takes, however, a lot to be at the top of the food chain – to be able to design, construct, invent things that others haven‘t thought of or can’t create. To be at the top, you have to be bold, be able to risk, have access to high-quality human resources and work in a good place for a business. In addition, you must also be ready for a long-term effort, sometimes involving entire generations. The path from component production to technological dominance to produce the entire machine could take decades.

In recent years Bulgaria has positioned itself as a competitive producer of parts and components. It’s a good start, but it’s just the beginning of our ascent up the chain. The Bulgarian industry is increasingly producing and exporting whole and finished products, but there must be more of them. We need to manufacture cars, not just the components for them. It is necessary to develop innovative products and services, because they are more expensive, have more value and provide more money-which is why such companies benefit more and their staff is more often highly qualified and well-paid. That is why Bulgaria should set its priorities in education, science, technology development. And at the moment, nearly 2/3 of the R & D expenditures are made by business. I hope that, with a significant increase in public funding in this area, it will have a ‘holding’ or an ‘increasing’ effect and will also lead to new private investments.

What is your forecast for the Bulgarian economy for 2021, considering the agreement that we will have BGN 12 billion in the framework of the Recovery and Sustainability Plan?

I expect that in 2021 we will be back to normal life, which means that we have successfully managed the pandemic. The consequences of it will inevitably be a lot, but I very much hope that GDP growth for 2021 will be above that of the pre-crisis levels. The recovery and sustainability plan will play a huge role for our country. Our ambition is to contribute to a faster recovery, as well as to create long-term prerequisites for growth. Of all financial instruments that have been developed and approved in Bulgaria by 2030, BGN 50 billion will be invested and the first years (2021-2022) will be with the highest intensity of investments.

Your wishes to the Bulgarian business for the New Year 2021?

I wish health first and foremost – personal, emotional, family, social, corporate. Crises imply risks, but also create opportunities for those who are brave and fast enough to seize them. Therefore, I wish the Bulgarian business to try to combine good financial health with a little more boldness. Do you know how to become an inventor? That’s when most of the people say something is impossible, but others who don't see it like that and just do it.