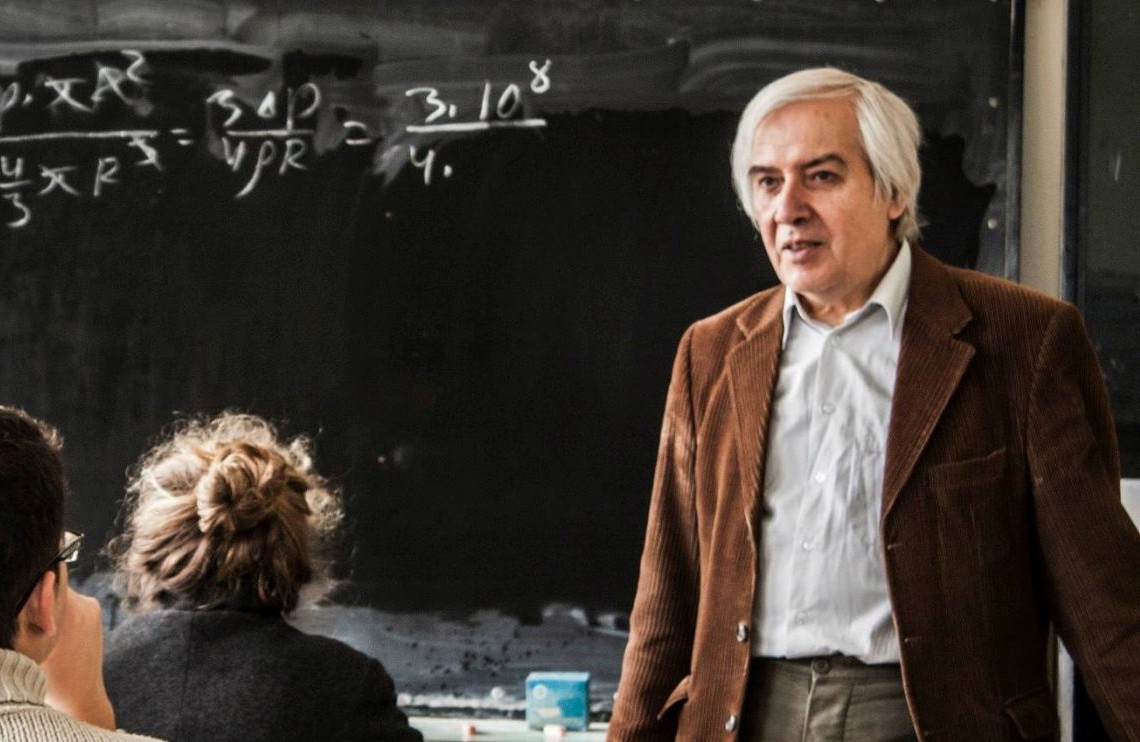 The lessons of the fighter against ignorance go beyond concrete knowledge, and honesty is a key competence.

Many of Teodosii Teodosiev's students earn medals from prestigious international science Olympiads and study at the world's most elite universities, but the lessons he teaches go well beyond physics and mathematics. He teaches his students his life philosophy, which dives beyond concrete knowledge. "The medals from the Olympics are just the tip of the iceberg, but they are not the most important thing," the teacher said. "The most important thing he wants his students to do is become decent people - honest citizens who create something real in society. Honesty is a key competence, " he is convinced.

There is one theory according to which the higher IQ stemms from two things, Theodosii Teodosiev says. The first one is that a child should have read a thousand books, from an early age, at the latest by the ninth grade, so that it developes a conceptual apparatus. The literary gift goes from there to having a rich vocabulary, rich associations. "A person who does not know a word cannot make a great discovery. There is no way to make this work," claims the teacher. And secondly, it is important for the child to study exact sciences from an early age. To start participating and learning them before high school course. In support of his words, Theodosii Teodosiev gives an example with one of his most successful students whose parents are literary students; the student joined his older brother, as he began attending physics schools from sixth grade, learning integrals, derivatives and solving differential equations. He is already a graduate of Harvard, majoring in Computer Architecture. The student has created energy-saving chips and, as a result of this discovery, Google saves hundreds of millions of dollars a year. All this thanks to Physics, Mathematics, but also to Literature. "For example, in France, students can get immatriculated with Medicine by acing 11 exams. 11 exams, including literature. My most successful graduate of international Olympiads Ivan Tanev Ivanov says that there was a child at their university - a mathematical genius. He wanted to study Medicine but was not accepted because of the Literature exam. At first glance, a paradox - what does a doctor need Literature for? What if he does not speak properly and does not understand what he is being told, it can be life-threatening for the patient, ”the teacher is convinced.

Unfortunately, in Bulgaria, children spend their youth defeating computer monsters and lose the most important years required for education, ”he said.

When he was a young boy, Theodosius Theodosiev read a book called "The Sectret of the Inventor". "There were crazy ideas there, for example, catching a thousand monkeys, putting them on typewriters, letting them type for hours, and accidentally coming up with a great idea. Or Newton was hit by the apple on the head and suddenly found something, "he says. But he is sure that these discoveries do not happen suddenly- in order to make a great discovery, you must be prepared, because “millions of people have been hit by apples on their heads and have found nothing. So just by the accidental method of blowing up a mountain and waiting for a piece of stones to turn out in the form of Venus Milos, yes, there is some probability of that happening other than zero, but it is very small and usually does not happen. "

The key word for us is "fake", says Theodosius Teodosiev. And he sets an example with those teachers who run their classes formally. "And at the second his class ends, he puts the marker down and stops there. One should not stop. A job must be done until it's done. This is a principle I’ve learned from my father. These values ​​are shared by the old Bulgarians, described by Ivan Hadzhiyski in The Life and Soul of the Bulgarian People. People have done their jobs qualitatively and completely. " According to him, the most disgusting thing is leaving things unfinnished. "So, from a young age, we have to teach children how to finish things, to see the result of their work. This is very inspiring."

The lie, according to Theodosius Theodosius, poisons the atmosphere in Bulgaria. "We have not yet survived that era where there was a lot of lying, where it didn't matter what you did, but what you reported. That's still going on. It doesn't matter how many cameras will be spying on the students will watch during their final exams, it is important who turns them on and off. First of all, we need honest teachers and, then, honest students. "Nowadays, there is no guarantee what lies behind the Bulgarian diploma. He might as well be a genius, he might also be absolutely illiterate, “ he said, adding that the Bulgarian education needs more honesty. "To need to wean the children out of the habit of begging for grades, hence- to work honestly and to be judged honestly. A lot of lies have accumulated, it has become our style and way of life, this is our inheritance. Theodosius Teodosiev also thinks that the universities in our country are too many. According to him, there is no such lie and deceit in the civilized countries. "Today we live in the age of substitutes, the mass consumption of material and spiritual surrogates.

Peoples, trapped in the consumerism will disappear as a culture and civilization, and the one who preserves their values ​​will survive. ”

Theodosii Teodosiev is also convinced that there can be no strong state made out of weak citizens. There are certain measures that are need to be implementated in order to nurture reliable taxpayers. When taking government loans, what matters most is what the money will be spent for and what the long term prospect is. According to him, if we take out new loans to pay up the old ones, the debt eventually grows, which it is counterproductive.

"There are countries that manage to retain their great minds," he says. "Years ago, I was at the Taiwan Olympics. They had several Nobel laureates who worked there, not in the USA. A Bulgarian at the Taipei University said the state had given so much money for education and culture that they could not absorb the funds. Their policy is to be on the edge of the wave. "

"The end result of studying Physics and Mathematics comes later on," the teacher says, "so the greatest virtue is patience. Most modern people lack patience, they want everything right away - a consumer society. Good things happen with patience, great things happen with great patience. " This is one of the basic qualities he cultivates and, in his view, is much more important than any specific knowledge. For example, the camp-schools the classes are very intensive, 100-150 tasks per day are solved. Thus, the student learns to work patiently, and thus individual knowledge can be acquired.

The problem with our education system at the moment is that it does not teach children patience, Teodosiev says.

According to him, if a child was born, for example, to a great artist or a great ballet dancer, the deep pursuits of Physics and Mathematics may be considered a loss of time, but there is a bare minimum that needs to be mastered. "It's dangerous to be illiterate because of the dangers of the technology itself. If Tarzan or Mowgli enters into a large urban environment, he could jump into the subway tunnel and become a victim. So there is a minimum of civilization that must be mastered by everyone, irrelevant whether you study modern ballet or want to become a quantum physicist. "

Theodosius Teodosiev quotes Aristotle, who said 2400 years ago that once upon a time people were very clever, but ever since the written language was invented, they could record everything and know nothing. "And now there's Google! It gets even scarier, people get lazy. Children will not read the two volumes of Don Quixote, even the student edition will not be read, but they will play the Disney movies. People need to learn to look for the truth in things, the originals in their fullness, and healthy spiritual food, ”he said. According to him, people do not even use one percent of their brain, and those, who use two percent become professors. "So far, machines have been doing the physical work, and if they start doing the mental level of it, what will a person do?! He becomes a simple walking organism. One dreams of a four-winged wardrobe, another - to fly to the opposite side of the moon. I'm trying to teach the kids the second one, "the teacher says.

Peoples get what they want to get, shares Theodosii Teodosiev. "The Czechs, for example, changed the system very quickly, without destruction, without looting and destroying previous property. There was a time when the Czech koruna was more valuable than the Swiss franc. They are a people who know how to make a high standard of living, how to make civilization. And they are closer to the center of Europe, we are a little bit more in the periphery and herein lies the cultural difference - looting at wholesale and retail. But this was the subconscious desire of the Bulgarian people. It is sad, but… ”There are nations, for example, the Jewish people, to whom civilization and culture are such that they teach children from a young age that knowledge is a value. Every child should be given a chance. "I don't think there are smart and stupid people, there are talented kids everywhere. And my experience shows it,” the teacher concludes.